India lost a gem on the 27th of July, 2015, with the passing away of Dr. Avul Pakir Jainulabdeen Abdul Kalam. Here is a compilation of eight stories and incidents, including my personal experience, which gives a glimpse of his benevolence and his impeccable character:

Dr. APJ Abdul Kalam visited Gauhati University on 2nd February, 2011 for the ‘V. Venkata Rao Memorial Lecture’. After delivering an inspiring lecture, he asked all the students to write to him about “What do you want to be remembered for” and gave them his email address. He assured that he would reply to some of the best emails, provided they were sent that day itself. I was present at the venue that day and like most of the students present there, I too jotted down my wish and mailed it to him. On 4th February 2011, I was surprised to get a reply from him via email. Not only just a reply, he also stated that he would send me his book “Spirit of India” soon. I was then, a student of class 11. What left me awestruck was the fact that such a great personality had cared to take out time to reply to the email of a Class 11 student! That was Dr. Kalam for me. I still have that email in my inbox and it was the first thing I searched for after I heard the news that Dr. Kalam is no more.

Once, when Dr. Kalam was with the Defence Research and Development Organisation (DRDO), there was a discussion about securing the perimeter of a building that needed protection. It was decided that pieces of broken glass would be put on top of the walls that surrounded the building. When Dr. Kalam heard about it, he urged the authorities to drop that idea stating, “If we do that, birds will not be able to perch on the wall”. Imagine someone, so great, caring for the birds more than the security of a DRDO building! The authorities gently agreed and the decision was changed.

The BrahMos missile, which is the world’s fastest cruise missile in operation, was named so because of Dr. Kalam. It is based on Russian cruise missile technology and was to be named Moskva, Moskva being the name of a river in Russia. It was Dr. Kalam who suggested that the missile should also be named after an Indian river. And hence, it was decided that the missile would be named “BrahMos”, a portmanteau formed from the names of two rivers, Brahmaputra of India and Moskva of Russia. It is a matter of pride for the Assamese people that the ‘Brah’ of BrahMos missile stands for the mighty Brahmaputra, flowing through their own land of Assam.

Once, Dr. Kalam was invited to be

the Chief Guest of a college programme. The night before the event, he surprised the students of the organising committee by visiting them late night as he wanted to meet and talk to the “real hardworking people” behind the event. Reportedly, he came to meet the students in a jeep, late night, with no security at all. That was Dr. Kalam, expressing his desire to meet and thank the people who toil hard to make an event successful.

On 26th May, 2005, Dr. Kalam visited Switzerland when he was the President of India. He was the first Indian Head of State to visit Switzerland after a gap of more than 30 years, the last being the one by former President V.V. Giri. Switzerland considers Dr. Kalam as the father of India’s missile programme and since then, May 26 is celebrated as “Science Day” in Switzerland as he visited their country that day.

When Dr. Kalam was the President of India, many children used to send him their greetings and their thoughts and ideas for developing the country. Some used to sketch his portrait and send it to him. Whenever someone had a good idea to share, Dr. Kalam never refused to meet him for a brief discussion whenever he could. He was also very grateful to the ones who sent him their ideas and sketches. He personally used to send those kids a “Thank you card” containing a goodwill message along with the kid’s name and a “Thank You message”, handwritten by the President himself.

At a convocation of IIT-BHU, Varanasi, Dr. Kalam refused to sit on a chair that was bigger as compared to other chairs. Five chairs were arranged on the stage, where the centre one was to be occupied by him. The rest of the chairs were meant for top university officials. When he saw that his chair was bigger than the other chairs, he politely refused to sit on it. Needless to say, that chair had to be removed and another chair of equal size had to be offered to Dr. Kalam.

When Dr. Kalam got to know that the Government of India takes care of the President of India and all the former Presidents, he decided to give up his life savings and salaries to PURA (Providing Urban amenities to Rural Areas), a trust he founded. Such was his heart for the rural people who were deprived of modern amenities. 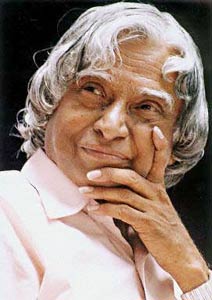 These are just a few of the numerous stories one can read about the benevolent Dr. APJ Abdul Kalam. He earned the sobriquet “Missile Man of India” for being the far-sighted architect of the country’s civilian space programme and military missile development efforts. One side of him was a scientist and science administrator but the other side was a very simple man with an immense love for children and students. He was also a prolific educator whose lectures are a delight to listen. He was a man with a missile in one hand and a big heart on the other, who will be always remembered for his smile, simplicity and endless love for students amidst his other endeavours in the field of rockets, missiles and science and technology. He died doing what he loved the most – interacting with students. His interaction with students till the last moments of his life, at the age of 83, is a testimony to his firm conviction and dedication for developing the country by encouraging the students. He believed in the active participation of the people in the process of nation building. His profound desire for interacting with people earned him the epithet “People’s President”.

Dr. Kalam’s “Vision 2020” now lies in the hands of Indian students like us, who need to fill in his shoes and continue his work to make his dream come true. That would be the richest of all encomiums and tributes we can pay him, as his message to the young people goes like:

2 thoughts on “8 True Stories Of The Benevolent Dr. Abdul Kalam”